Sanja - An aesthetic expression of the deepest feeling of the human mind when it results in an imitation, then that imitation is recognized as a symbol of our culture and folk art. It is very easy and pleasant to understand the depth of the sensitivity of the human mind through these symbols. When art is expressed through religion, then that work becomes sacred and revered. Religion has given seriousness to art, so even art has left no stone unturned in sacrificing its beauty on religion. The artistic beauty of religion and the religious nature of art are sacred and glorious. The gift of this beautiful union is a sweet and beautiful festival of Malwa district. It is the festival of manifestation - Sanja! On the day of the departure of Barkha and the day of the arrival of autumn, this nature-oriented festival is celebrated.From the Pratipada of Ashwin month, unmarried girls of Malwa start this festival which lasts for sixteen days which is entire Pitru Paksha. The number sixteen is also a sign of perfection for a teenage girl. Without knowing the entire story of Sanja, it would not be enough to just discuss her catchy figures and pleasing songs..Different nicknames like Sanji, Sanja, Saniya and Sanjhi denote the word Sandhya in its pure form.According to the Kalkapurana (Vikram's tenth-eleventh century), a contrary legend emerges that it was from the union of Sandhya and Brahma that 40 Bhavas and 69 Kalas arose. Who was Sanja? The answers to this question have been different since adolescence. Sometimes it is believed that Mother Parvati had established this fast to get Lord Shiva. In Sanganer this fast is observed in the memory of the ideal girl Sanja.The Kilakot (cattle dung idols inside the border ), which was built on the last day of Sanja, has full influence of Rajput culture. In the medieval period, the entire city was settled within the fort. Their complete management is indicated in the figures. It is considered necessary to make Meera's car in Kilakot, this leads to curiosity whether Sanja fast is related to Meera's visit to Dwarka? Probably, Sanjhi was popularized by the arrival of nomadic castes in Malwa, Braj, Rajasthan etc. and its origin is more likely from Ajmer-Sanganer. This is its historical side based on popular beliefs. But many questions related to its use remain unanswered even today. First of all, what is the relation of Sanja with Pitru Paksha? Sanja's marriage affair, mention of her Saubhagyashri with her in-laws side is a sign of a beautiful life, but then what is the meaning of the tradition of celebrating her in Shraddha Paksha? Why don't married women make it after the first year of their marriage? Some estimates that it is known to be related to evil and that evil must have happened within a year of marriage of Sanja. But the charming expression, rasa aliphatic and good fortune of Sanja's Mangal songs prove that Sanja must have been an ideal, cultured Sukanya of her time. The well-being expressed in the songs, for parents, and finally in-laws-in-laws and are all auspicious. It is possible that after the departure of her in-laws due to her parents being dear to her, she may have started a festival of unmarried girls in her kingdom in memory of Sanja, which later acquired ritual significance. Every day new and specific cow dung motifs are made and decorated for Sanja festival. Women of all age celebrating Sanja with folk songs and prayers after every sunset for 16 days .

Every day at dusk, a background is prepared by smearing cow dung on the outside of the house on the wall above the threshold or on a clean wooden board, this background has a specific shape. The sanja is prepared before sunset and the aarti is prepared after sunset. These days, along with cow dung, flowers, leaves, prasad, worship material, etc., one can easily see girls gathering friends to sing Mangal songs. Starting from Pratipada till the last day, the sanja is kept on the wall with its full glory, wearing various attractive figures. To make motifs attractive, they are made in relief style with the help of fresh cow-dung are decorated with flowers, bright and colourful stripes of paper. On one side this festival represents religious faith and while on other is form of entertainment. Here making of Kel image on gyaras of pitra-paksha is considered as good symbol and has special significance in Sanja. After 16 days girls take out the figures and immerses it in the river with certain rituals .The historical aspect of Sanjhi is based only on folk songs in the absence of concrete evidence, yet it is so clear that it has a message of good luck and prosperity for the future life of the girl child. In conclusion, it can be said that the dignity and excellence of this melodious, gentle, melodious festival, starting from Pratipada, has survived the thorns of modernity, keeping its fragrance, glow and shine intact even today. It may be all 'odd' for the 'convent' girl of the urban culture, but for the girl brought up in the Malwa culture, this festival and the rainbow memories of this festival after marriage always make her feel fresh and sweet, will continue to do so. 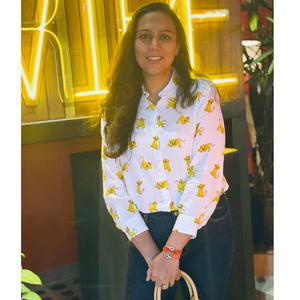 A free soul seeking and surrendering to supreme energy which keeps us all moving and motivating...