It was the month of December,2015 that I came to know that my Guru Adhyapak Dr. Bhabananda Borbayan will be visiting Guwahati accompanied by a group of Artists from France. The group was invited to perform Mahapurush Srimanta Sankardeva's "Ankia-Naat", "Parijat Haran" that too in the French language keeping our Sattriya Dance Form intact. My excitement regarding the Bhaona grew even more after I came to know that they will be performing under the guidance of my respected Adhyapak. The "Bhaona" or play was to be rehearsed in a day 15th day workshop that commenced from 19th December to 2nd January,2016. The play was scheduled to be performed by them on 3rd and 4th of January,2016 on the occasion of the 1st International Srimanta Sankardeva Festival to be commenced from 2nd to 8th January,2016 at Srimanta Sankardev Kalakshetra, Panjabari, Guwahati. I decided to meet Adhyapak along with my brother at Kalakshetra. When we reached the venue, we found the rehearsal were going on in full swing. To my surprise, these foreign Artists greeted us joining their hands and wishing "Namaste" which is totally an Indian Tradition. After that we watched the rehearsals, clicked some photos and interacted with some of the members. It was a delight to watch them perform the "Bhaona" with their superb acting, dialogue delivery, being something that I was never expecting to be so fluent. A few days later, on 27th December I received a call from Adhyapak. He enquired whether I was free and willimg to perform the role of an "Apsara" in the "Apsara Nritya" in the midst of the "Bhaona". My happiness knew no bounds and I immediately agreed to perform in an occasion of such stature along with those Foreign Artists. It was like a "dream come true". The very next day itself my rehearsals began. I was accompanied by two disciples of Naren Baruah Sir, Bhaswati and Purbasha. 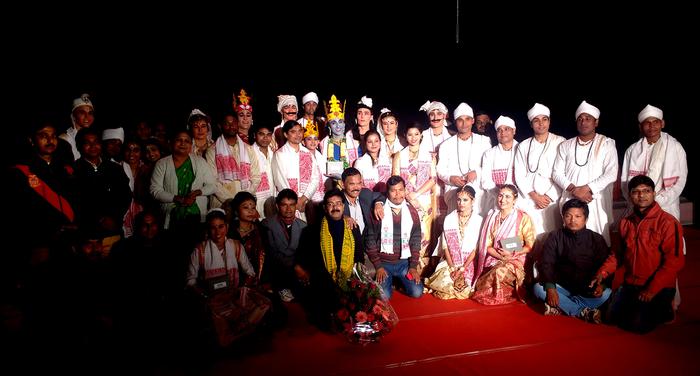 The next seven days were an experience that I will always cherish. I interacted with the group and came to know many things about their culture, life styles, customs, habits, etc. There were altogether ten Artists who had arrived here from Belious Institute of Franch. The Artist were Mattis Appelquist Dalton ( Sutradhar), Benedetto Zurlo ( Lord Krishna), Fanny Steinmetz(Rukmini), Malo Bara ( Narada), Xavier Jallais ( Garuda), Maite Jeanolin ( Satyabhama), Fabrice Cot ( Indra), Patricia Sicre ( Sashi), Nikos Appelquist Dalton (Narakasura), Charolate Bauduin (Satyabhama's Friend). Some of them were students from Oxford University, Stanford University. Though at first I thought that they were all from France. I later came to know that they were all infact from different countries of Europe namely Belgium, Italy, Denmark and France. One fact I found striking was that Patricia, Charlotte and Maite had purchased Salwar-Kameez for the "Bhaona" rehearsals. The group was so interested with our culture, tradition, habits, etc that most of the free time was spent by discussing about Assam, its land, people, food, dresses, etc. Benedetto even started having rice with his hand during our lunch-time instead of using spoon, like he initially preferred. One fact I would like to highlight about them is that during the entirety of the workshop, their dedication and determination towards the Bhaona was praiseworthy in the least. Being professionals they quickly grapsed all about Taal-Maan, Hasta, Pada, Abhinaya, Geet-Ragas, etc. Even on parts or beats that they found difficulty, they used to listen to the tune or beats, then convert them to tunes that they were familiar with and perform it again with renewed effect. Watching Mattis the Sutradhar who was just nineteen years old, utter the "Slokas", "Bhatimas",etc was an absolute delight. Their "Praveshar Angcha", "Dhanu Yuddha", "Gada-Yuddha", "Taruwal Yuddha" were excellent. Our group was accompanied by musicians namely passed out students of Department of Performing Arts, Dibrugarh University and "Bhakats" from Uttar Kamalabari Sattra, Majuli who performed the traditional "Gayan Bayan" before the Bhaona. 3rd and 4th January, 2016 were the days of our final performances. The program was a grand success with the entry of each character followed by resounding claps on each day. After the "Khormaan" and the prayer of Sri Sri Madhabdeva's Naamghoxa "Najanuhu Awahana Najanuhu Bisarjana..........", at the end, where all of us prayed together I found that the people were giving us a standing ovation. Adhyapak introduced us all with a brief description of every Artist. I saw that his eyes were full of joy and happiness. I want to express my gratitude towards Adhyapak Bhabananda Borbayan for giving me this opportunity to perform in the Bhaona. I imparted my training in Sattriya Dance under his guidance since I was seven years of age and to perform under his supervision after so many years was a dream come true. It's only through his teachings that made me what I am today as a tiny speck of the Sattriya World. At the end of the Bhaona every one praised the acting of the Artists, greeted all of us with joy and happiness and took group pictures. The parting with the group was bitter sweet as they all departed the very next day for their respective countries. But this experience of seven days is something I will always cherish throughout my life. 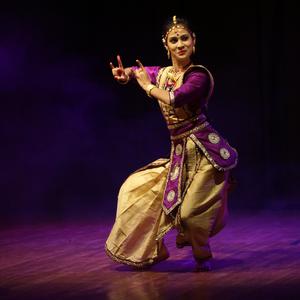 Anannya Mahanta is professional Sattriya Dancer from Guwahati,Assam.She completed her...