Freebirds Stories
The Boy in the Train

"You'll always be late for the previous train, and always on time for the next.” ― Piet Hein I rejoice whenever I get a window seat on Indian trains whenever it’s a chair car (otherwise Upper Berth would be my spot), more so when it is the last seat near the door, usually marked 4. There’s always more legroom for those who get the last seat. The TTE (Train Ticket Examiner) sits in the same seat on the other column, marked 1, which feels quite safe for a single woman traveller. When I need to leave my seat for a short break, it’s the TT (in short for TTE) who would watch over my luggage. When I need to ask how delayed the train was, it was again the TT, my neighbour for the journey. However, sitting near the TT comes with other experiences too apart from the sense of security. There would be travellers without a ticket, looking for a vacant seat, who would sit on the TT’s seat itself pretending it’s theirs and later being laughed at, when busted. There would be people coming to him complaining about this or that on the train, disturbing my long-journey-nap. One such gentleman found his way to the TT quoting a boy disturbing them, begging for money. The TT, a middle-aged man wearing his black-and-white uniform, at once stood up from his seat and followed the young gentleman to find the peeve. I craned my neck to see a little bald head running away at the sight of the TT. A scene deserving a little giggle. Minutes later, the TT comes back to his seat. Whatever was the issue must have been sorted by now. There’s a little guy wearing a dirty brown shirt and short-pants sweeping the coach with a tiny broomstick. A little bald head, a sheepish smile and a husky little voice that surely needs some spoons of honey to gulp, made him appear adorable to me. He picked up two empty bottles from the floor and declared decently to the TT in a voice that was yet to attain masculinity, “ye main bottles le raha hu. Mere paas nahi hai na.” I smile at him and he smiles at me back. The TT shows approval and advices him all the things we wish to say to little children whenever we find them begging or working. It was evening and the boy had his excuses. I hand him some money along with a tiny piece of candy, apart from the empty bottle that went to his collection. I realize I cannot abide my own policies of not giving money to beggars and giving them food and an earful of advices instead, so that they choose better paths. The little boy smiles at me, a front tooth missing and my heart melts along with my conscience while he shows off his earnings to the TT. The boy later finds a sack of rice under one of the chairs and asks the TT, “TT babu, ye kiska hai?” The TT sits straight alarmingly at his question and then relaxes once he realizes it was an innocuous rice bag. “Hoga kisi ka,” he says casually. The boy, before leaving the coach, declares his motive, “Last stop tak nahi gaya toh main le lunga.” He smiles at me playfully after stating his point and leaves. The TT says, mostly to himself, “haan, sab le lena.” I cannot stop laughing. My stop was the last in the train, which was delayed by more than an hour. When we finally arrive at the last stop, I scan my seat one last time. Charger picked up from the plug. The novel I was reading, kept back inside my backpack. My neck-pillow attached to one of the handles on the bag. When I saw there was nothing more I may have missed, I leave the coach to get down from the train. I secretly wish I didn’t need something I carried, I wish I could leave something useful to someone else. Somewhere a little boy would be gleefully looking for mistakes and forgetfulness. His little gifts. 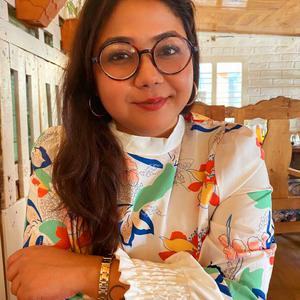 Author of 4 poetry books including the Amazon Bestseller of 2020 - The Art of Letting Go. My...